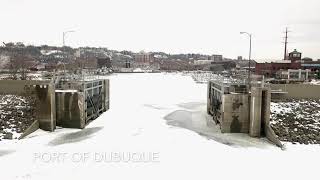 One last look before a full dive in.

The seed has been planted ...

The nature of living in Tri-State area is specific. Within 15 minutes I can drive through three States. It’s a tricky thing and it comes in stages. One minute I am driving through downtown Dubuque, Iowa. Moments later I am hovering over the Mississippi river. Finally, in less than ten minutes total I am 'in the middle of nowhere' end of Wisconsin. Different terrain, speed limits, laws and culture, it can get complicated and weird.

The first time I drove to Sinsinawa Mound for my weekly meeting and seminar, was on January 31st at 6pm. It was like driving through what I would imagine cold intergalactic space darkness would feel like. This intergalactic space ended in front of a deer. I did not hit the deer, thankfully, but what hit me was that I was incredibly stressed! This was NOT city driving. The only stress that I had driving in Chicago at night was traffic lights, speed cameras and other drivers, lots of bad, bad drivers, and that I was used to.

There are no traffic lights in the country; in fact, there are no lights at all, with the exception of our natural satellite – the good all moon (if you are lucky). Seldom are there other drivers either; it’s just you and darkness ...and deer. Needless to mention there are no cameras, so if deer or other emergency strikes, you better hope that other satellites, besides the moon are available.

My deer looked at me unfazed, offended, almost like it was judging me and then skipped away. Meanwhile, fueled by the adrenaline rushing trough my body, I quickly played a couple of clips in my head of how my poor Toyota would take the hit, had I not stopped in time. Oh dear, I thought to myself; this is going to be interesting!

The darkness and the cold seemed intensified by nature’s explicit display. There is something so chilling to see the remarkably vast, powerful and otherwise incredibly dynamic Mississippi river frozen still. Nature is what I was excited about in this area and in the dead of January, I was not feeling it. I was missing the hustling and bustling of North, Milwaukee and Damon not the sleepy frozen intersection of county road Z and ZZ (literally that is how I figured it was the end part of Wisconsin). However, there was a lot of work to be done, so I put my head down, read, wrote, planned, cooked and hibernated.

Time has a way of passing too quickly when you’re not paying attention. To the rescue came daylight savings time – we’ve came out of the darkness! I must admit however, even before that I started to warm up (no pun intended) to the wintery nature. One evening, while driving to “The Mound” during a full moon; the beauty of the vast frozen rural landscape revealed itself to me. I was in awe to the point of tearing up. All this time, I was waiting to start admiring and enjoying this area for it’s explicit beauty during growing season, not realizing that the beauty was happening already, it was I that was not paying attention to it.

I guess sometimes things aren’t revealed to us until we are ready. I had a lot of letting go to do over past couple of months. Letting go of people, things, places, behaviors and habits. Letting go is a tricky thing, for me it comes in stages. First come the pain, sometimes anxiety, confusion, aggravation, stress, apathy and lots and lots of denial. Then comes awareness and clarity before I finally let go. Letting go usually comes with saddens but it is quickly replaced with the excitement of new possibilities and a fresh vision for what’s to come.

I am happy that I was ready to have my Full Moon experience. It made me realize that, although the season hasn’t started officially yet, I have been doing a good amount of growing already!